The staff is in the midst of working on a specific current issue, amongst other regularly scheduled work that they were supposed to do. I'm trying to wrap my head around all the moving pieces and don't know my path forward yet.

I was sworn in on Monday Nov 5th at the inaugural board meeting. I got to borrow Trustee Parrott's eagle feather for my vows. So the work begins.

I want to write about a complex issue that trustees and staff (and the community at large) are grappling with at the moment.

This past Wednesday evening, there was a standing committee meeting (Facilities Planning, formerly Committee II) where a delegation from Cavell Elementary came to present regarding the seismic upgrade of their school. They pointed to the a few pain points for them. The three main ones were communication, swing site, and lack of expansion (with the worry that further disruption will happen in the future when the expansion is needed).

The swing site issue is being worked on. Expansion is dependent on a Ministry of Education process which will give results in 2019; we know that the MoE will not expedite the assessment—we've asked and pushed on the subject a couple of times already. The district currently does not have the funds to top up the project.

On the topic of communication pain, an example is that Cavell had no consultation meetings with anyone prior to the approval, which at the point could have been the VSB staff, the Ministry of Education, or the District Project Office (which is a joint office comprised of VSB and MoE staff). The Cavell parents pointed to other schools who had more consultation before/during their seismic process. There's more complications behind the scenes that sort-of-somewhat explain why this is happening, which I won't go into here, but I see the reason behind their hurt feelings.

After the Cavell presentation, Trustee Reddy noted that even though we are mostly new and have inherited the broken process, we are still taking responsibility for it. I hope that helped set the tone that we, as a board, own the mistakes and we're working on fixing it.

At break, a staff person made a comment that keeps coming back to me. They said, paraphrased, "The last thing we want is for parents to fight against parents, or pit parents against school staff. If they're mad at us, that's better for the community in the long run." I think it stuck out because this way of handling a conflict is not something I'm familiar with.

I don't get the sense that this is the only or even an important guiding principle of the staff, but it's an interesting take on community building and on how an entity can choose to wield its power. They're not saying they should make the final decision because they are the wisest or that they have the best solution; it's a sense that there is a need to protect the community from itself, and it's better to throw ourselves under the bus than any member of the community.

This keeps coming back to me as the days unfold and the process moves forward. We are now receiving emails from the new potential swing school community. (To clarify, they are individual members and not necessarily representative of the community.) My instinctual method of resolution is to sit them all down in a room and work it out, as I would if I had a misunderstanding amongst friends. But in the off-chance that it doesn't work out, is it going to cause harm in the community?

Time is a big constraint. We can't delay the seismic process; there are many unknowns if we tarry (on top of known obstacles, such as escalating costs and increased risks to the lives of school users). If we don't have time to get to an inter-community concensus, and concensuses are messy and take time, is this the next viable option?

Trustees and senior staff have confidential information. Would this go better if everyone had all the information? I suppose it depends on what better means. Might it help folks trust the school board more? Might it harm inter- and intra-community relationships? or maybe not. Might be... no net effect?

Is it even possible to have everyone get all the information?

Were it a personal relationship of mine, I'd have no problem taking a leap of faith and trust that I can mend the relationships and let the other parties deal with their relationships, trusting that they have their own wisdoms and truths to guide them. But there is a different power dynamic here and I see the wisdom of the staff as well. For now, I'm trusting their wisdom because I don't see my own path forward yet. 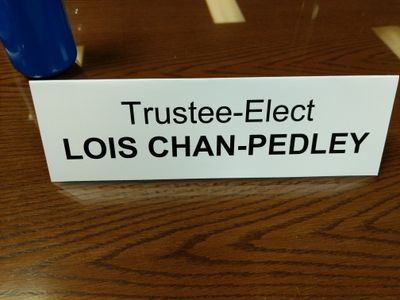