A couple of things to clarify here:

Police forces in different places operate differently. The VPD and RCMP (both of whom have programs in VSB schools) do different things/behave differently while on school grounds. They may share some similarities with other police forces (we get a lot of comparisons with the Toronto District School Board) and there are useful points to take, but even in Peel the situation is quite different from TDSB (https://globalnews.ca/.../peel-schools-police-officers.../). The best way to move forward is to actually engage with our own students and communities on dialogue.

"for every student who felt safe... there are many more who did not" - this is an assertion that should be tested. Based on speaking with a (smallish) number of current students and alum I can't say that what I've heard supports this statement, but granted, I want to help every student feel safer and more welcome, so I get the spirit of it. An in-depth engagement with students would give us a better idea, as well as more info as to the how and why. Right now we have a handful of voices speaking up bravely here, some info from other districts/parts of the world, and a whole lot of assumptions.

"Do they not wear a full police uniform and carry weapons while in schools?" Often they don't, and it depends on the activities they take part in. An example is the Windermere run club. The SLO runs with the students in gym gear.

A review of the program will also give us a fuller picture of what the program is doing, and guidance on ways it could be improved. I have some preliminary stats on the number of students in the criminal justice system; it's not as bad as some claim but it could probably be even better. I think scrapping the program wholesale will have a net-negative effect. In my ideal world the SLO program gets better at ensuring that more students can feel even safer in schools.

In terms of why police are in schools in the first place - it's complicated. Bad things do happen in schools. Gangs do recruit in schools, whether we like it or not. Allowing the police to have some knowledge of schools and students isn't a bad thing in and of itself, assuming the police acts fairly (which we know they sometimes don't). The police will likely go through some sort of reform in the near future - not confirmed, it's just something in the air - so the SLO program will need to evolve too.

The risks of temporarily or permanently halting the program include the reduction of some services that the VPD currently provides to students, at no cost to the VSB. Leaving aside the argument of whether they should be the ones doing it in the first place, this reduction in services could cause harm to students in the short term until the void can be filled by someone else. This is a risk I'm willing to take (/put onto students... :/) because I think a cooling-off period is valuable, and also to allow students to be engaged in the review more freely and earnestly (my beliefs, not fact).

It isn't perfect but it's probably the best we can do on Monday. 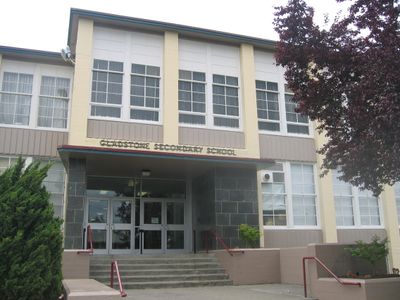